Since you can filter by projection type (in the selection by thumbnail), I’d like to offer a brief introduction to the different types available.

I will confine myself mostly to optical differences, I am not going to explain how they are constructed mathematically or why they are called »cylindric« etc. 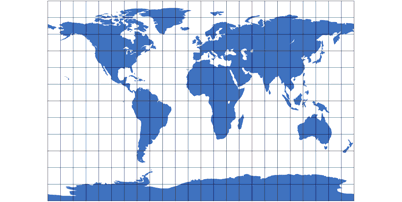 Cylindric projections are rectangular, meridians and parallels (the circles of latitude) are straight lines at right angles.
At least as long as you’re viewing the common equatorial aspect – that’s when the equator is at the vertical center and runs from left to right in a straight line. In other aspects the lines of graticule are curved, as for example can be seen in the Cassini projevtion. 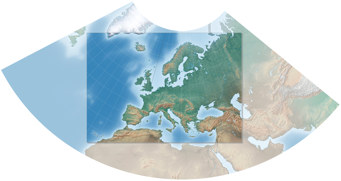 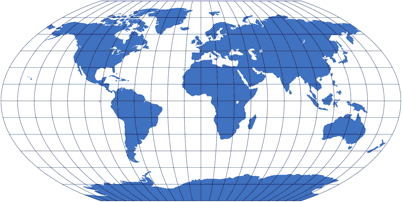 Pseudocylindric show straight parallels and a straight center meridian, all other meridians are curved – or, in a few cases (e.g. Eckert II), broken.

Pseudocylindric often show a pole line (see schematic of Wagner VI); but also there are pointed poles (e.g. Sinusoidal), sometimes being the apex of an ellipse (e.g. Mollweide)

Meridians are equally spaced along every parallel. That’s why some projections which look like pseudocylindrics at first glance are listed among the Miscellaneous Projections – they lack this property. 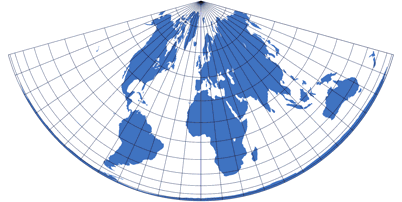 Conic Projections look like cones… or rather, like cones that have been rolled out.
Usually they are not used for world maps but rather for showing a smaller part, i.e. a single continent or country – except for e.g. the Schjerning I projection, which was designed for the whole world.
Moreover, you can configure various conic projections to get a halfway decent depiction of the Earth’s surface – but in the very most cases, you’d be better off with a projection from a different group.
I’ve included a few conic projections, but mostly for the sake of completeness and because I feel they look interesting, although I do think that it’s not very useful to compare them to other projections. 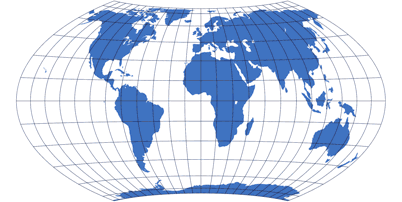 The term lenticular was proposed by Daniel »daan« Strebe in the article Map Projection Essentials (a highly recommendable article, by the way) – but as far as I know, the term hasn’t become widely accepted yet.
So why did I adopt it anyway?

The reason is, there is no generally accepted general term for that kind of projections that are called lenticular here (and by Strebe). Some authors divide them into groups named after their mathematical lineage, calling those groups pseudoazimuthal, modified azimutal, polyconic etc. Others put them into one group (just like me) but call all of them »polyconic«, which is a bit of a problem since that group includes projections that are genuine polyconics, i.e. derived from the conics mentioned above – like the American Polyconic – as well as projections that definitely aren’t.
And still others stuff them all into the Miscellaneous class, which then contains a large number of projections. That’s quite inconvenient in my opinion: Miscellaneous should always be a term that refers to a relatively small group which really can’t be identified otherwise.

Moreover, I really like the term lenticular.
It is also used for galaxies that have a certain shape – and what is good for galaxies can't be bad for map projections. ;-)
So thank you, daan! 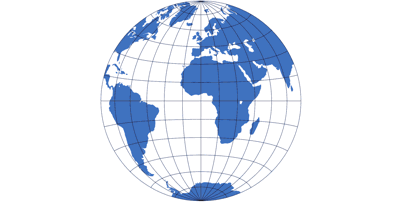 A few decades ago it was quite common to use azimuthal world maps in atlases, showing the eastern and western hemispheres side-by-side (example: Azimuthal Equal-Area projection). Nowadays they are, like the conic projections, mostly used as an excerpt from the full projection to show smaller parts.

Moreover, I’d like to point out that not all circular projections are azimuthal – some, like Van der Grinten I, belong to the Miscellaneous group.

The group of polyhedral projections was added to my website not until the beginning of 2019. Mainly because before that, I could generate only very few images of that type. On this type, earth’s surface gets projected to… well, to a polygon (that includes a triangle), which leads to a distinctive shape of the map.

Sometimes you can cut a map of this type into pieces and put them back together differently, resulting in a rectangular shape, like on Kunimune’s IMAGO. Nonetheless, those maps of course still belong to the type of polyhedral projections.

Using a polyhedral projection can lead to comparatively low distortions of shapes and areas, or at least a low range of distortion values. 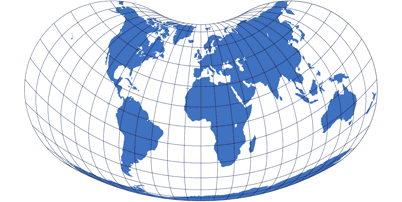 And finally, there’s the Miscellaneous group which covers all projections that don’t fit into the others – not even into the lenticular class, which already is kind of a melting pot.

And what about the interrupted projections? 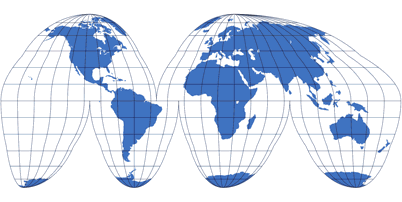 Actually, there is no group of interrupted projections! They belong to one of the other groups (pseudocylindrics, mostly).

But in terms of comparison – and after all, comparing projection is what this website is all about – I thought for quite some times that it’s good idea to group the interrupted projection separately, so you can set a filter in the selection by thumbnail.
Meanwhile however I think it’s more appropriate to file them under their genuine type.

After that has been clarified, I’d still like to mention what’s the benefit in interrupting a projection:
If you remember that it’s impossible to project Earth’s surface to a flat map without having distortions of some kind, it’s easy to understand that you can minimize distortions by interrupting the projection.

After all, an orange’s peel can’t be flattened without being torn apart (to quote a popular example). So you could say that interrupting a projection is inspired by everyday knowledge…

2 comments
There are further comments in the german version.

showing other side of the globe map (even in flat form) would help one visually assess the shortest distance distance between USA & Japan.
Mon Feb 25, 2019 8:02 am CET