What’s this all about?

When I got interested in map projections, I conceived the desire to compare them directly.
I’ll elaborate on this in a moment, but for reasons that’ll become obvious later, let’s have a look at the Robinson projection first. 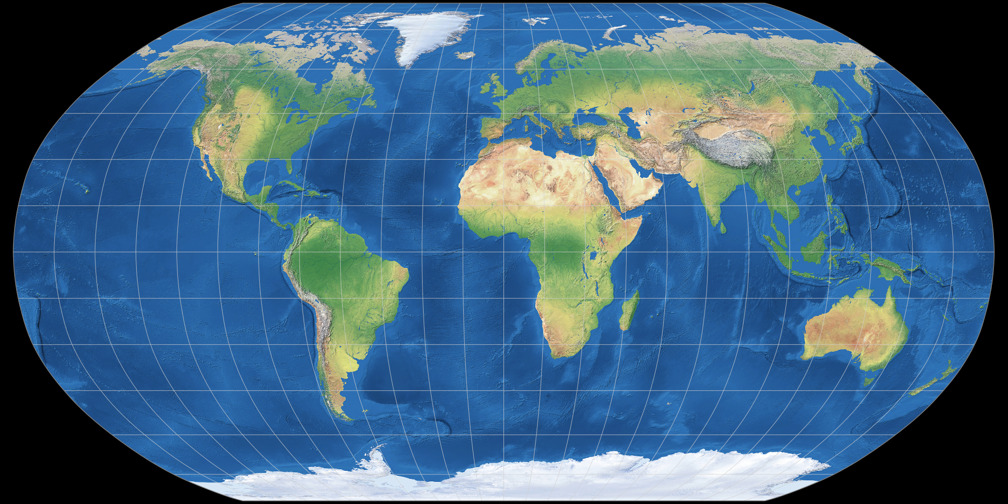 When I was skimming through a book an map projections, every once in a while I felt that two different projections weren’t so different after all – in fact, I asked myself: »Aren’t they identical?« I turned the pages back and forth, back and forth; but I couldn’t spot the differences. That short moment of turning the pages was enough to thwart the plan to compare them directly.

The same thing happened when I was looking at map projections on the web… that was even worse: Not only I had to switch between browser tabs but also the projection images were of different size or using different imagery.

So one day when I failed to see the distinctions of two projections, I downloaded both images, scaled them to the same size in an image editor, layered them on top of each other, giving the one on top an opacity of 50%.

I was stunned.
The differences that I failed to see before were so obvious in an instant that wondered how it’s even possible to miss them!

In the weeks that followed, I repeated the procedure each time when I found two projections that looks quite similar – or, when the differences were obvious in fact but I wanted to compare them in detail. And after some time I was fed up with repeating this over and over. I thought it might be convenient if I had a bunch of images that all are of the same dimensions and imagery.

So I installed the G.Projector software, picked Tom Patterson’s Natural Earth II as input image and started a small collection of projection images.
Then, I wrote a website for my own personal use, containing the scripts needed to layer and toggle the images. And since I couldn’t decide whether to use physical maps that toggle on mouse click or superimposed, semi-transparent silhouette maps, I just decided to use both. ;-)

And later, namely when I compared Wagner IX to Winkel Tripel, I felt the need to compare the distribution of distortions, and I added the Tissot indicatrix images. About that time I thought that I maybe should release the website to the public: Maybe from time to time it might be useful to someone who is interested in map projections.

But now, I’ve got to approach another topic.
Let me quote Karlheinz Wagner from the preface of his book Kartographische Netzentwürfe (1949), which is, in my understanding, a kind of standard work among german cartographers:

In principle it has to be said that there never can be the often desired book about map projections without mathematics. That would be the same as if you wanted to learn to play the piano without the instrument.

And here I am, publishing a website about map projections – without mathematics.
Was Wagner wrong?

No, of course not! If you really want to learn something about map projections, you have to know the mathematics.
But to stick to Wagner’s example: You can enjoy piano music, you can learn to distinguish the different musical genres or even different styles of playing the piano, without ever touching the ivories yourself.

But now, I’d like to come back to the two projections I mentioned in the beginning. Those that I fail to distinguish in the book. One of them was the Robinson projection that I showed above, the other one was Wagner V which is shown below.
Please scroll up and down, and maybe you’ll find it hard to see the differences, too.
And them, when you’ve tried that a few times, follow the Link to the direct comparison of the two projections. I think – and I hope – that you’ll agree that there, the differences are much easier to see.

And basically, that’s what this is all about.
Compare Wagner V with Robinson 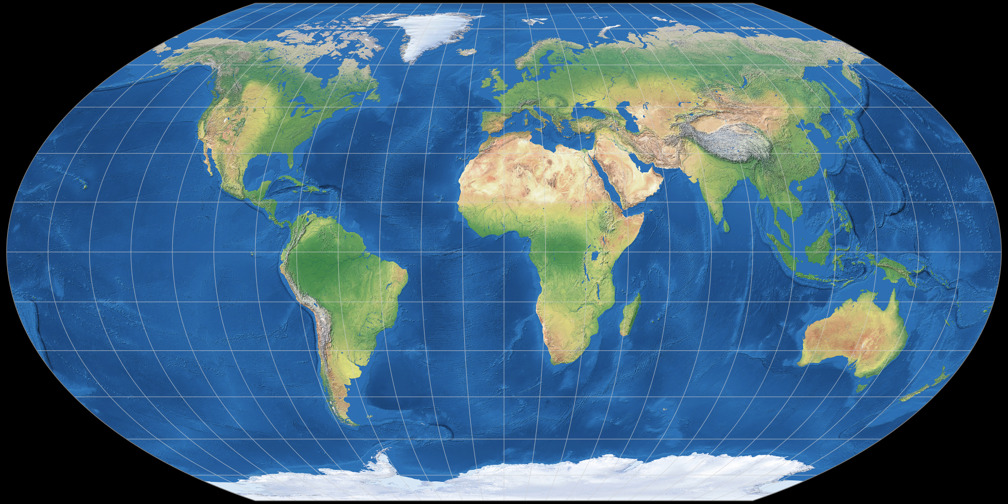 4 comments
There are further comments in the german version.

This tool is incredibly helpful for me at work right now. I'm trying to convince management to abandon using Web Mercator (for full globe views) in favor of something much more realistic, like Wagner or even Var Der Grinten.
Tue Sep 17, 2019 11:17 pm CEST

Thank for the praise! :-)
And for the suggestion, but… no, that comparison would actually be quite boring because, as Wikipedia puts it: “The discrepancy is imperceptible at the global scale”. Meaning a Web Mercator image here would look exactly like the genuine Mercator.
Mon Feb 03, 2020 4:57 pm CET