The name »Winkel Tripel BOPC« was made up for this website.
However, I didn’t come up with the idea for this variant and quite possibly it has been used before. Learn more about this matter (and about the abbreviation BOPC) here.

Oswald Winkel designed the Winkel Tripel in 1921 by calculating the arithmetic mean of the Equirectangular and the Aitoff projections. On the Equirectangular you can set the standard parallels, and Winkel chose approx. 50°28´ – that’s arccos(2/π) to the mathematicians [1] – before mixing it with the Aitoff. 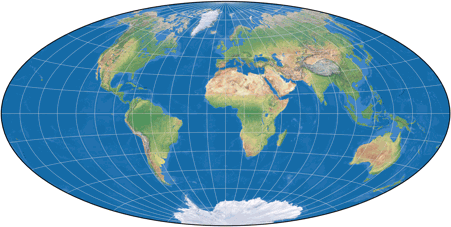 About 1955, John Bartholomew designed a Winkel Tripel variant for the Times Atlas, in which he chose 40° as standard parallels for the Equirectangular portion of the projection. The resulting projection is wider than the original and many people will argue (and I agree with them) that it shows a better distribution of distortions. By the way, Karlheinz Wagner pointed out already in 1949, that this value »seems to be the most appropriate for a world map« and presented a corresponding figure. [2]
Here in this website, this variant is filed under »Winkel Tripel Bartholomew«.

Setting standard parallels to 40° on the Equirectangular portion will give you Winkel Tripel Bartholomew.

However, in a forum thread on mapthematics.com I found the assertion that there is a third variant of Winkel Tripel: The Oxford Atlas version with 0° as standard parallel in the Equirectangular portion, which of course is the plate carrée projection.
Now, the application Geocart offers the option to blend two projections. And so, I blended the Aitoff and plate carrée projections and voilà, I had the Oxford Atlas version. [3]

My first thought was to put it on the website using the name Winkel Tripel Oxford Atlas, but…
besides the aforementioned forum entry, I couldn’t find a single evidence on the web that there ever was an Oxford Atlas using this map.
Of course, things like this happen. You probably wouldn’t find out which projection is used for the world map in my 1997 Meyers Atlas, too. So this doesn’t mean that the Oxford Atlas never used a Winkel Tripel having the reference parallels at 0°. But as long as I couldn’t find any proof, I was reluctant to use this name. Moreover, the Gall-Bomford projection is sometimes referred to as »Oxford Atlas projection« [3] so it might be a better idea to choose a different name in order to avoid confusion.

So for now, I just called it Winkel Tripel based on plate carrée – or, abbreviated, BOPC.
I might change the name if I find ever find out that there already is an established name for this variant. 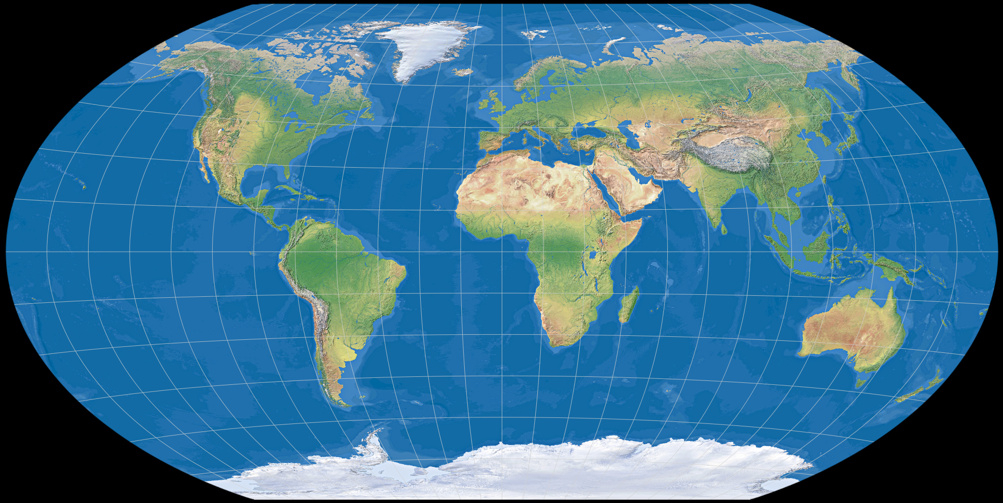 "I don’t know what Geocart is exactly doing when you blend two projections. Is this even related to the arithmetic mean after all? However, when I choose the Winkel Tripel Bartholomew directly from Geocart’s menue on one hand, and blend the Equirectangular projection (standard parallels at 40°) with Aitoff on the other, the results are identical. So it’s safe to say that my blended Winkel Tripel BOPC, for all intents and purposes, matches the actual arithmetic mean."

Geocart blending is confirmed to be averaging for 0.5, and linear weighting for other priorities. https://www.mapthematics.com/f…

Have you ever compared this BOPC with Wagner Vl? It seems a complicated way to reinvent the wheel, since they look almost the same, but the Wagner VI has the advantage of straight parallels.
And keeping the correct 2:1 parallel/meridian ratio, bearable inflation and distortion, and no vertical distortion in the middle of the map, Wagner VI is my favorite of them all. (I hate when Africa and South America are vertically elongated!)
By the way, this site is amazing. Thank you!
Thu Jan 20, 2022 11:02 pm CET

Hi Jonas! You’re right, the Winkel Tripel BOPC does look like Wagner VI with curved parallels – I have to admit that I never really realised that *blush* so thank you for pointing it out.
Wether straight parallels are an advantage or not, is of course open to debate…