Note: I’m no cartographer. The recommendations below are made by a complete layman!

Wagner’s family of nine projections with reasonably chosen characteristics is of course offering a wide range of possible applications.
I’m inclined to say that for usual world maps – i.e. like those you see in atlases and lexica, on news programs and newspaper articles, on wallpaper maps etc. –, you can modify an old idiom that is used amongst typographers:
When in doubt, use Wagner. [1]

Of course, I’m not saying that Wagner’s always the best possible choice but, as a rule, using Wagner you’re never completely wrong. (Except for special cases like navigation where you still will refer to Mercator, or radio work which normally uses the azimuthal equidistant projection for good reasons.)

Having said that, the question remains which one of the nine Wagner projections should be used for a certain application. I’d like to show my own answers to this very question. 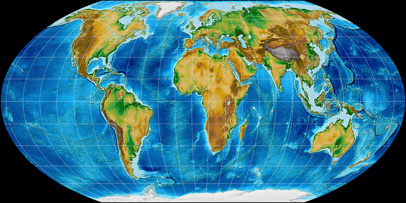 As I’ve said before: For a topographic map, I’d always choose an equal-area projection – so in this case, that leaves Wagner I, IV and VII. I’ll discard Wagner I first, since sinusoidal meridians are very uncommon nowadays. Out of the remaining two projections, I prefer Wagner VII: Africa is elongated a little bit less and it has better distortion values in the corners. Nonetheless, Wagner IV still seems to be a good choice in case you prefer straight parallels. 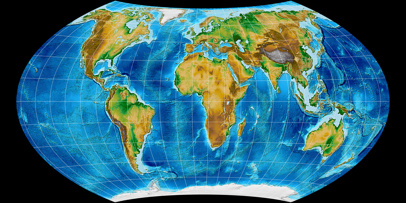 So that was the easy part.
For the other kinds of maps, it was much harder for me to come to an decision. Not because I didn’t find a decent variant but because I had too many projections that’ll serve…

Before we look at examples of political maps using Wagner projections, I’d like to digress a bit by asking:
Does a political map have to be equal-area?

The short answer is: No, I don’t think so.
Arno Peters, in contrast, thought that an equivalent map is mandatory in terms of equality and justice. No country is favored, no country is disadvantaged. But will the size of a country tell you anything about its significance or about its power? I think history taught otherwise. What is a significant country anyway? In many regards, the most significant country in the world is the one you happen to live in.

Moreover, does an equal-area map really help you to evaluate countries’ sizes? Of course, an equivalent map will not make you think that Greenland is bigger than South America (as does the Mercator projection) when actually, South America is about seven times larger.
But look at these images where I’ve highlighted Chile (red) and Zambia (blue). These two countries have virtually the same size. [2] Can you tell it just by the look of it? I surely can’t. I can see that they are, well, roughly in the same ballpark. But you can see that even on projections that definitely aren’t equal-area, e.g. the well-known Winkel Tripel or Wagner’s approximation towards Winkel, Wagner IX. On that account, I don’t think that you need an equal-area projection for a political map. 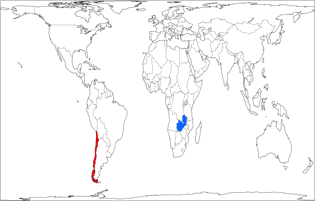 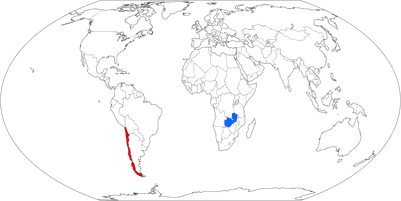 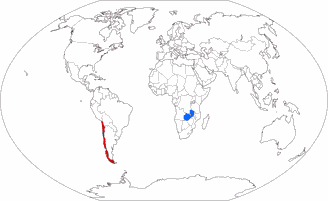 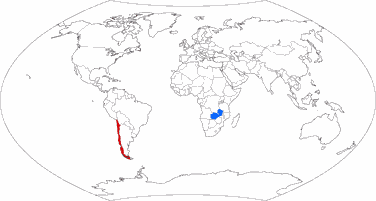 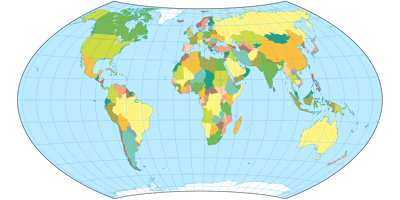 So if you want an equal-area political map, Wagner VII is a very good pick – but I’d also take Strebe 1995 into consideration. 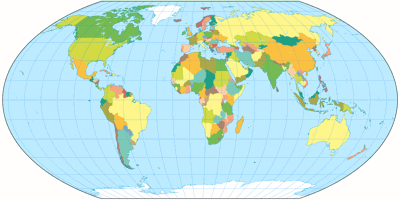 If you prefer straight parallels, I recommend Wagner V, an aphylactic projection which has better shapes than its equal-area counterparts but still is quite close to equivalence, so you get a good idea of the size relationships. 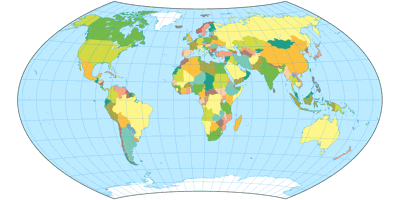 But my favorite in this area is Wagner VIII: It offers the compromising properties of the Wagner V but with curved parallels (like Wagner VII) to furtherly enhance the shapes.

Karl-Heinz Wagner himself seemed to think likewise, because in the german Columbus atlas of 1961, which was edited by Wagner, he chose Wagner VIII for the world map.
Who am I to disagree? ;-)

But remember these are only my favorites. Basically I think that you can use any of the Wagner projections for a political map, therefore I’ll add images of the other ones, too. See for yourself. 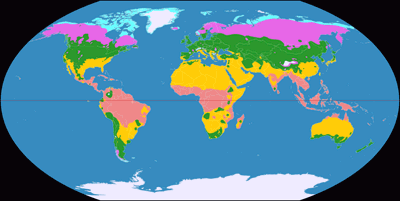 I’ve said it before: The climate zones are related to the latitudes: As a rule of thumb, you can say that it gets colder the farther you move away from the equator.
And that’s the reason why I’d always recommend a projection with straight parallels for a climatic map. And moreover, I’d prefer equally spaced parallels. Of course, this exaggerates the total size of the polar zones, but keeps their real north-to-south extension which is more important in this case (at least, in my opinion).
That leaves us with Wagner III and VI. 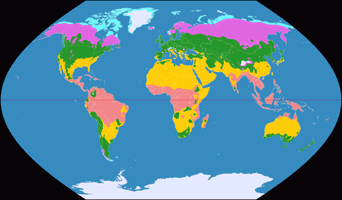 Considering the fact that meridians using elliptic curves are much more common nowadays, most people would probably choose Wagner VI, nonetheless I do think that Wagner III with its sinusoidal meridians does make a fine climatic map, especially if you use the option to set the standard parallel arbitrarily.

If you decide to set the standard parallel at e.g. 40° North/South, you’ll end up with an image that uses less horizontal space without loosing any information – and which has, according to Wagner himself, »a better distribution of distortion«. Even if you don’t agree with that… well, honestly I don’t think that distortions of shape have to be avoided at all costs in a climatic map.

For a thematic map it’s of course crucial which kind of information you want to display. Wagner’s well developed family of projections includes good options for about any purpose – but let’s start the other way round by showing a thematic map where a Wagner projection might not be the best choice: For a climatic map, I recommended a projection with straight parallels since the phenomenon that is displayed is closely related to the latitude. Consequently, I have to recommend a projection with straight meridians (i.e. a cylindric projection) when the phenomenon is closely related to the longitude. But there is no cylindric projection among Wagner’s projections. 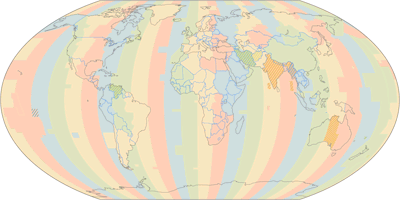 On the other hand, I don’t think that a time zone map using a pseudocylindrical projection is incomprehensible, and on the upside, it even gives you the (right!) idea that the time zones converge towards the poles. Since I don’t see any point in preserving the shapes of the continents or proportions of size here, my pick is the aphylactic Wagner V. 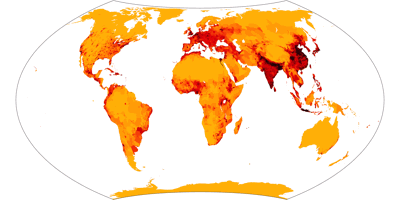 The next choice is quite easy:
Whenever densities of phenomena are to be shown, of course an equal-area map is best. So again, the choice is between Wagner I, IV and VII; and again Wagner VII is my favorite.

However, this is mostly an aesthetic choice, so let’s at least take a look at the same map using Wagner I and IV: 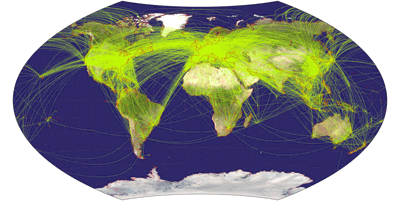 Now, this one is a fine example that you have to choose wisely when preparing a thematic map: When showing the airline traffic around the world you have to consider that a lot of traffic passes the north polar areas. So it’s a good idea to favor a projection that doesn’t vertically compress this area, otherwise the map might become confusing.
So that’s a call for Wagner’s projections with equally spaced parallels. Being a fan of the lenticulars, my favorite is Wagner IX, but III and VI will do nicely, too.

Here are the latter projections, accompanied by Wagner IV which, being an equal-area projection, compresses in north-south direction and therefore serves as a bad example. 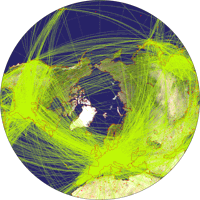 By the way, the air line traffic maps might be a good example to teach students that sometimes, map projections can fool you if you don’t know how to read them: On these maps it seems that the planes take a turn north of Canada and Siberia. Of course, they don’t. They follow a straight line as you can clearly see on the azimuthal equidistant projection.

Note: I dropped the Early human migrations map that I used in the articles about Patterson and Strebe. It was an ill-chosen example in the first place, since a map like this will work with most projections.

On the decorative renderings of the Wagner projections I didn’t get the results I was expecting: Before I was actually generating them, I expected the pseudocylindricals with elliptical meridians (i.e. Wagner IV, V, VI) to look best by far. I thought that the pronounced shearing of the sinusoidal pseudocylindricals (Wagner I, II, II) as well as the curved parallels and pole lines of the lenticular projections (Wagner VII, VIII, IX) would make them… well, look wrong when stripped of their graticules and outer borders.

But when I examined the finished maps, I came to different conclusions.

So the bottom line so far is that the compromise projections Wagner II, V and VIII are the ones that I like best. And among those, Wagner V is my favorite – the pseudocylindric projection with elliptic curves. So after all, something turned out as I expected. However, there was another surprise: I liked the modified Wagner IX which is called IX.i here just as much as Wagner V.

So in this case, I’m showing all of the ten variants. See what works best for you:

As I’ve said in the beginning, you’ll find an appropriate Wagner projection for a lot of purposes. I hope I was able to show that. Of course there are always alternatives that might work just as well or sometimes, even better: For pseudocylindric equal-area maps, there’s always Eckert’s work, and the Hufnagel projections will give you a great amount of freedom in design; for equivalent lenticular maps check out Strebe 1995 and 2011. If you prefer a compromise map, the popular Robinson and Winkel Tripel projections are a safe choice, but also consider the Canters or Ginzburg projections.
And so on and so forth.

But if you need a bunch of projections with different properties, that (for the sake of homogeneity) still have a similar appearance, the Wagner family of projections is an excellent choice.

And with Wagner I through IX you still haven’t reached end of the possibilities that the Wagner transformation method (»Umbeziffern«) offer. I’m going to elaborate on that in the third part of the series of articles.